Napoleon prepares for the invasion of Egypt 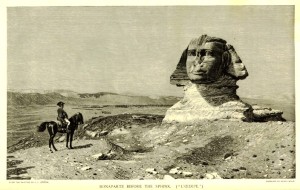 The Directory gave Napoleon cart-blanche to organise full scale invasion of Egypt with the strategic aim of destroying British influence in the Eastern Mediterranean and replacing it with the French. It was in the Directory’s best interests to send Napoleon as far away from Paris as possible. His popularity was growing, while theirs declined. Fearing a coup, the feeble Directory was anything but secure in its position. If Napoleon went to Egypt, he might conquer it for France, which would be good, and he might die in the process, which would be even better. And were he to be defeated, the public opinion might turn against him.

For Napoleon, the invasion of Egypt was an opportunity to follow in the footsteps of his heroes, Caesar and Alexander. He didn’t rule out using Egypt as a stepping stone for further contest of the East. He described Egypt as a geographical key to the world, saying, ‘Egypt is but a molehill. All the great reputations have come from Asia.’

Egypt was officially ruled by the Ottoman Turks, who conquered it in 1517. However, in reality the control was in the hands of the Mamluks, a military cast originally from Georgia in the Caucasus. Their rule was unpopular among the Egyptians, not only because the Mamluks were foreigners but also because of the high taxes they imposed. The idea of invading Egypt appealed to the revolutionary idealists who could think of nothing nobler than freeing the oppressed peoples. Napoleon, however, saw the main reason for the invasion in countering the British trade interests in the Mediterranean. ‘To destroy England thoroughly, the time is coming when we must seize Egypt,’ he said.

lanakortchik
•
Follow
A thousand ratings on Amazon US! Reviews are everything to an author. Huge thanks to everyone who has taken the time to read and review. I am so pleased readers are enjoying Daughters of the Resistance. #books #bookstagram #bookrecommendations #booksofinstagram #historical #wwii #wwiifiction
View on Instagram |
5/9

lanakortchik
•
Follow
I am taking part in Book Aid for Ukraine auction, where you can bid on many fantastic items, such as signed books, agent 1-1s, hotel stays, lunches with authors and much more, offered by members of the publishing industry to raise money for the Ukrainian people. I'm offering first chapter critique. Please bid if you would like some feedback on the first 5000 words of your manuscript. All proceeds go to British Ukrainian Aid. Link in bio. #UkraineCrisis #bookstagram #bookinstagram #bookaidforukraine #ukraine #supportukraine
View on Instagram |
6/9

lanakortchik
•
Follow
My beautiful Kyiv, the city of my childhood, my heart is breaking for you and my every thought is with the people of Ukraine. We spent three wonderful years in Kyiv when I was a child, the happiest years of my early life. We have friends in Ukraine who are more like family. What is happening right now feels like a horrible nightmare. How is it even possible, in this day and age? Praying for peace in Ukraine and the world. #standwithukraine
View on Instagram |
7/9

lanakortchik
•
Follow
Two of my books, keeping each other company on the other side of the world. Thank you Barnes & Noble #books #booksofinstagram #bookworm #booklover #bookstagram #historicalromance #historicalfiction #wwii #wwiifiction
View on Instagram |
8/9