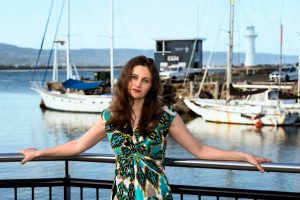 Lana Kortchik grew up in two opposite corners of the Soviet Union – the snow-white Siberian town of Tomsk and the golden-domed Ukrainian capital, Kyiv. As a teenager, she moved to Australia with her mother. Lana and her family live on the Central Coast of NSW, where it never snows and is always summer-warm.

Lana studied IT at university and, as a student, wrote poetry in Russian that she hid from everyone. For over a decade after graduating, she worked as a computer programmer. When she returned to university to complete her history degree, her favourite lecturer encouraged her to write fiction. Lana hasn’t looked back, and never goes anywhere without her favourite pen because you never know when the inspiration might strike.

Lana’s short stories appeared in many magazines and anthologies, and she was the winner of the Historical Novel Society Autumn 2012 Short Fiction competition. Her first short story was about a couple in love and trapped on the opposite sides during World War II. A few years later, this story became a novel and was published by Endeavour Press. In 2018, Sisters of War was acquired by HQ Digital, an imprint of Harper Collins UK. A year and a half later, it became the USA Today bestseller.

Lana loves books, martial arts, the ocean and Napoleonic history. She can often be found on the couch or in bed, wearing her best pyjamas, typing on her laptop or scribbling something in her notebooks, while drinking camomile tea and eating chocolate. Her husband thinks she’s just being lazy.